Have you ever used Atom and wondered what all the colors in the gutter, tree view, and status bar mean?

The answer is Git. Atom has built-in support for projects stored in a Git repository, providing core APIs and also including packages that add Git-specific features.

Today, I’d like to walk you through some of my favorite Git features in Atom and explain a bit about how they work and how they can be tweaked.

First off, the packages and features mentioned in this post are all built around Atom’s core Git API.

The atom.project global has a getRepo() method that will return a Git repository for the current project. This object can be used to access information about the state of the repository and details about a file’s status and changes.

This class uses the git-utils library which uses native bindings to the libgit2 library.

Now onto the features, starting with my favorite, cmd-alt-z. This keybinding checks out the HEAD revision of the file in the editor.

This is a quick way to discard any saved and staged changes you’ve made and restore the file to the version in the HEAD commit. This is essentially the same as running git checkout HEAD -- <path> and git reset HEAD -- <path> from the command line for that path.

This command goes onto the undo stack so you can use cmd-z afterwards to restore the previous contents.

Atom ships with the fuzzy-finder package which provides cmd-t to quickly open files in the project and cmd-b to jump to any open editor.

The package also comes with cmd-shift-b which pops up a list of all the untracked and modified files in the project. These will be the same files that you would see on the command line if you ran git status.

An octicon will appear to the right of each file letting you know whether it is untracked or modified.

Atom can be used as your Git commit editor and ships with the language-git package which adds syntax highlighting to edited commit, merge, and rebase messages.

You can configure Atom to be your Git commit editor with the following command:

The language-git package will help you with your brevity by colorizing the first lines of commit messages when they’re longer than 50 and 65 characters.

You can tweak these styles by adding the following snippet to your ~/.atom/styles.less file. Click the Atom > Open Your Stylesheet menu item to open it.

The status-bar package that ships with Atom includes several Git decorations that display on the right side of the status bar.

The currently checked out branch name is shown with the number of commits the branch is ahead of or behind its upstream branch.

Also an icon is added if the file is untracked, modified, or ignored. The number of lines added and removed since the file was last committed will be displayed as well.

The included git-diff packages colorizes the gutter next to lines that have been added, edited, and removed.

This package also adds alt-g down and alt-g up keybindings that allow you to move the cursor to the next/previous diff hunk in the current editor. 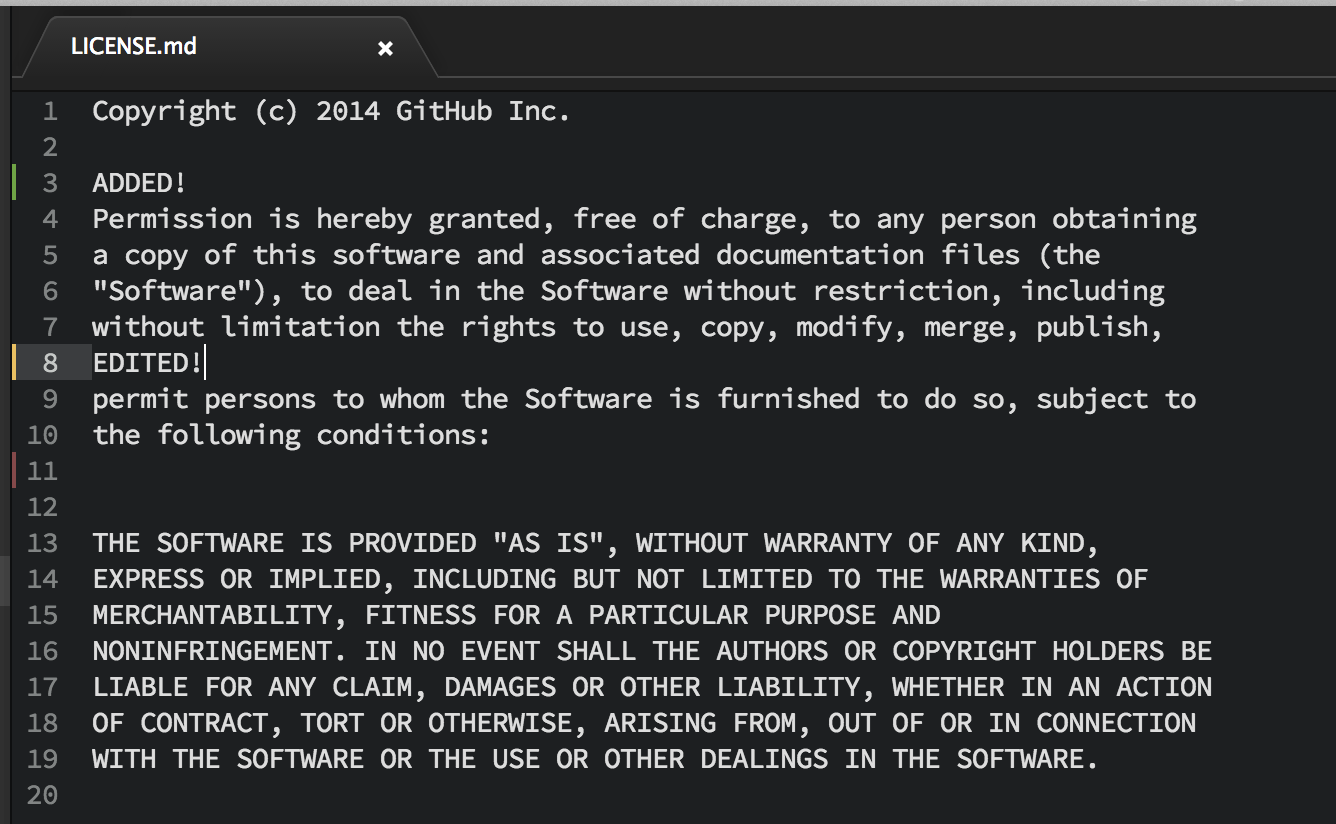 The included tree-view packages colorizes folders and files that are untracked, ignored, and modified.

Want to make modified files bold in the tree view? Add the following snippet to your ~/.atom/styles.less file:

You can also use the .status-added and .status-ignored classes to style those types. In the screenshot below, new files are green, modified files are orange, and ignored files are dark grey.

You can open the styleguide using cmd-alt-shift-g to see more of the Git CSS classes that the built-in styles and themes use.